Unlocking the Code for Brain Healing and Reversing Memory Loss

Unlocking the Code for Brain Healing: Natural strategies for preventing Alzheimer’s and Reversing Memory Loss.
Dr. Wes Youngberg, Sunday, May 22, 2016 from 1:00pm to 5:00pm.
Did you know that Alzheimer’s is also known as Type 3 Diabetes and Insulin Resistance of the brain? While current medications have failed to effectively treat or even manage Alzheimer’s, new research shows how combined natural strategies can powerfully reverse memory loss and cognitive decline. Learn what those strategies are and how to apply them to you personally! Learn how genetic testing can give you hope, especially if you carry any of the genes associated with late onset Alzheimer’s. What role does food have in the
prevention and even effective management of Alzheimer’s and other memory
related conditions? Come hear about the latest research on foods that literally
help turn off the Alzheimer’s genes. Learn about four specific therapeutic fats 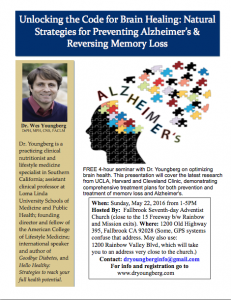 that promote healing of the brain. Find out what spices and fruits are especially helpful and how to tell if your getting adequate intake of vitamin B12 and folate. Is eating multiple small meals better for Alzheimer’s and memory or is fewer meals better? At least 25 natural strategies to optimize brain health will be discussed. Don’t miss out! Program will also be live-streamed free on YouTube.Hosted by the Fallbrook Seventh-day Adventist Church, 1200 Old Highway 395, Fallbrook CA 92028.

At his presentation on Wednesday night, Youngberg claimed diabetes can be reversed. Skeptics and believers alike attended the event to hear him explain what his new book reveals as, “epigenetic,” where healthy lifestyles can actually reduce the expression of disease genes in the body and reduce the inflammation of underlying dysfunctions within the body.

“When I was 10 years old, my mother was diagnosed with brain cancer,” said Youngberg during the introduction of his presentation. “This made a huge impact on me. And I remember when I was 13, I asked my dad while we were raking leaves on that fall day why she had to die. Before he could respond I said, “What are my risks of that and what do I need to do?”

From there on Youngberg decided he wanted to help others to prevent the brewing diseases in people’s genetic codes.

As Youngberg got older, he said he was trained at Loma Linda University, earning a master of public health degree in nutrition and a doctor of public health degree in clinical preventative care. He is an assistant clinical professor for the school and a certified nutrition specialist and fellow of the American College of Lifestyle Medicine. Youngberg said he worked in Guam for 14 years, where the island faces some of the highest rates of diabetes in the world. He has more than 20 years of disease therapy experience and his own office is located in Temecula, California, called Youngberg Lifestyle Medicine Clinic, where he helps a variety of patients.

His new book “Goodbye Diabetes-Preventing and reversing diabetes the natural way” explains not only the affects and ways to reduce diabetes but also a way to prevent or reduce other issues that can arise such as heart disease, cancer and depression.

“Ninety percent of people who have pre-diabetes aren’t even aware that they have it,” said Youngberg.

The book is separated into sections: Defining, detecting, defying and defeating diabetes.

He explained to citizens that everyone carries some sort of “bad gene” but there is hope in finding a way to turn off the disease switch and turn on positive genes that prevent the disease by developing a healthy lifestyle.

“Exercise, eating healthy, getting adequate sleep and vitamin D and just having hope that you can get better, are some of the steps to take,” said Youngberg.

Some advice given to the audience was to think good thoughts, be a first-class foodie, optimize digestion, exercise especially after meals, get sound sleep, stay well hydrated, network in getting therapy and reach out for support.

“Food is like coding into a computer. It codes into our bodies and are factors into how our genes work,” said Youngberg.

Youngberg said his greatest satisfaction is being able to actually see people transform themselves from unhappy and sick to healthy and positive.

One man at the presentation told Youngberg during the Q&A that he was diagnosed with Type II diabetes two years ago and since then he has started Matt Foreman medicine, he’s walking more and having his wife make healthy meals. He said he has dramatically decreased the diagnoses of his diabetes to almost non-existent.

“That is wonderful to hear. Never give up on your health,” said Youngberg to the man.

He said how people behave and live has an impact on the genes that are passed down to their children.

“I thought it was interesting,” said Nancy Klopstein. “I believe about 99 percent of what he is saying. And he’s very interesting himself. He never missed a note.”

“We [the hospital] want to help promote healthy lifestyles and reverse diseases within the community,” said CEO of the IU Health La Porte Hospital Thor Thordason. “We see a lot of obesity, drug use and smoking within the community and anyway we can spread education, we do by having these events.”

Free diabetic screenings as well as a book signing were offered to the public before the presentation.

Youngberg was invited to speak to the public by IU Health La Porte Hospital. He also spoke to the employees of the hospital during a one-on-one conference on Thursday.

Coordinator of the event from Marketing Strategies Unlimited President Jan Klooster said she plans to have more speakers available to the community and the employees of the hospital in the near future.

« Previous 1 2
Sign Up for Our Newsletter!
Recent Posts
Categories